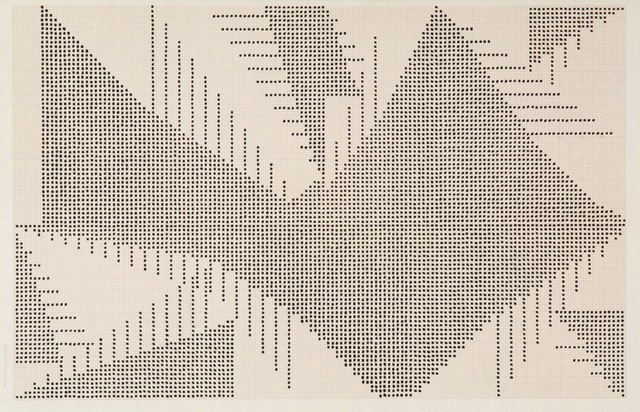 Starting from a research on the social and communicational dimension of her artistic work, since the mid-70s Bia Davou (1930-1996) conceives a serial system of her art. The artist composes a system of principles, a strict modus operandi, based on the organization of the elements of her works in numerical sequences such as the Fibonacci series and the binary system. According to this predetermined system, the depiction of the structural elements takes place in a serial manner, with each sequence occurring from the relation of the previous two. This serial manner can be applied to a multitude of variations, in an endless development, by means of drawing, of painting, embroidery on grid or plain paper, on bricks, hessian and so forth. […] The painstaking and time-consuming process employed by Bia Davou, especially the craft based practice of embroidery, bring her close to the epic of the Odyssey and Penelope’s weaving of her veil. […] In the series of drawings under the general title Serial structures 2. Odyssey (1978-1981) Bia Davou copies verses from Homer’s epic in a geometric alphabet, organizing them on the basis of numerical sequences that do not follow the metric system of the poetic composition. The artist’s selection of excerpts from the Odyssey concentrates on the travels of the Homeric hero, suggesting a parallel between the duration of Odysseus’ voyage and of the artists’ creative act. […]